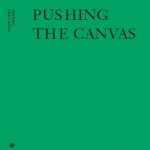 From the days of my childhood, I remember this experiment: you repeated a word — e.g. chair or chimney — until it detached itself from its meaning. The word then no longer referred to its content: it had become a series of letters in a row, a meaningless item. One can experience the same feeling browsing through one of those glossy magazines in which the designer plays with a varied array of colour. Usually we quickly leaf through these magazines, but sometimes our attention is captured by a single page and we begin to ask ourselves questions. What is the foreground, what is background? What was printed first, what was printed over it? There is something illusory about both experiences. It is as if there is a moment when the brain rushes ahead of our sensory perception.

Stefan Annerel has made this phenomenon the subject of his paintings. At first sight, Annerel’s work is easy to read. It consists of attractive, glossy, abstract “canvases”, in which horizontally and vertically painted bands of varying width define areas in a multitude of colours: orange, turquoise and black, green, lime and white, red, orange and deep blue, purple and green… The canvases somehow resemble pieces of a chequered fabric, with a pattern that appears in all sorts of combinations and sizes. As he presents his paintings, Annerel often extends the coloured bands onto the walls, where they provide a visual support for the paintings that hang above, underneath, on or in-between. On looking closer, Annerel’s paintings themselves turn out to be illusory. What at first sight seems to be a two-dimensional area, may prove to consist of various superimposed layers; what seems to be painted, may be tape; what seems anchored in abstraction, is sometimes based on a figurative element.

Seeking inspiration in cheap fabrics and objects that are typical of the downmarket shops in the average shopping street-dishcloths in shamelessly swearing colours, the

red-white-blue or yellow-orange-green bags people so often use to carry their laundry to the laundrette-but also in the tritest images from magazines, Annerel carefully constructs his chequered patterns. On rare occasions he even uses these materials as support. On these he interweaves bands of colour and brightly coloured or brown tape. Sometimes the paint and tape appear as what they are, but at times the artist attempts to make one look like the other. He starts e.g. painting a lozenge; he finishes one part with tape in the same colour, suggests tape with paint or puts tape on the work, removes it and paints the resulting structure.

Annerel’s paintings are as it were “kits”, though the artist himself prefers to call them “models”: precise exercises to achieve a balance, finished off with a coating of synthetic resin. The work is decorative, but also daring. A tension results from the fact that the paintings are actually not properly finished. Sometimes the bands of colour are slanted or seem a bit short. The tape has been torn or cut carelessly. A dash of paint wilfully protrudes from the straight band of colour it belongs to. Sometimes the coating of synthetic resin is wrinkled. But most importantly: Annerel convincingly manages to combine low culture (cheap consumer goods) and high culture (paintings) and in that sense he creates a trompe l’oeil.”